I liked trips to Hamburg a lot when there was a concert in town and when I heard that Metalium would perform in Hamburg I had the idea to go there together with Tobias and Jan. Well it became an quite good trip but not one of the best trips. Simone joined us but had to return earlier that night. Tobi and I went to the Markthalle to meet Metalium backstage. We watched the band doing their warming ups but were thrown out of the room shortly before the doors opened. I stood in the first row and had a lot of fun banging together with Jack Frost, the guitar player from Metalium. I made some incredible pictures. Tobias who was not so much into that type of music stood at the bar having some drinks. After the concert we didn't catch the last train to the fishmarket and had to walk a bit. Well I have to say that Tobias got a little bit on my nerves always complaining about something that got wrong in his eyes. I instead tried to enjoy the concert and the whole trip. We later joined Jan in the Headbangers' Ballroom and although Tobias only wanted to go to the backstage he had a lot of fun there because we met some really good looking girls there.
When it got to hot in the Ballroom and the bands did not seem to come to the Aftershow Party we changed our places and went to the Backstage. And the only thing I can tell you now: Tobias wanted to take the first train back to Hannover and we only got the third train back! ;-) 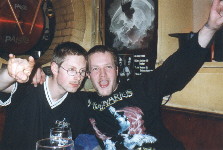 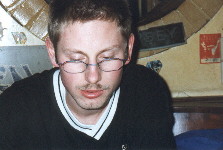 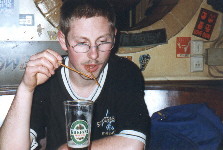 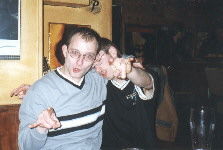 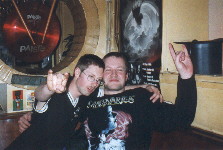 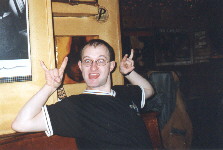 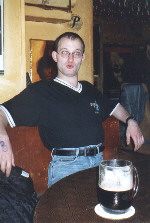 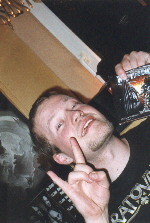 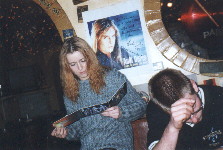 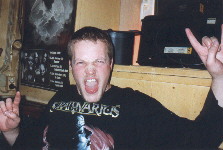 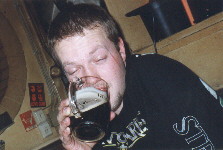 ...and Mc Donald's on our way home at our sixth trip 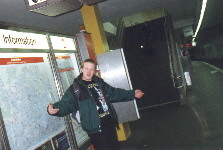 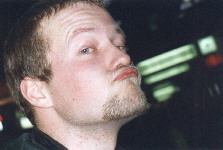 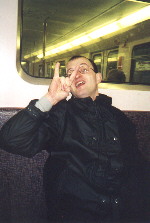 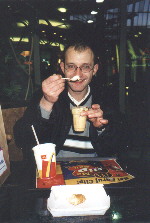 (1): Tobias celebrating the night in the subway train, (2) Tobias shows how not to eat!

It was for sure it would be great to celebrate New Year's Eve again in Hamburg so...